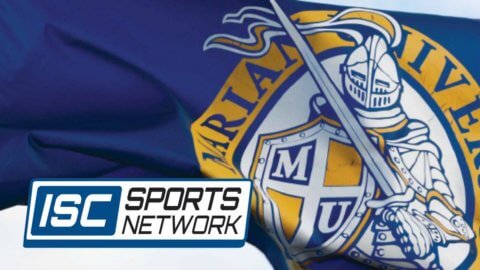 The ISC Sports Network and Marian University Athletics have announced a multi-sport broadcast package for the 2021-2022 athletics season. ISC will air 23 of the Knights’ regular season contests, which began on Saturday September 4 with the Marian football regular season kickoff.

“I’m very excited about expanding our partnership with ISC,” said Steve Downing, Director of Athletics. “The Marian brand has grown, especially in the last few years, and ISC allows us to take that even further by reaching a wider audience to increase our fan base. Last year’s partnership was a great opportunity for us to provide an excellent product for soccer, basketball, and volleyball viewers, and we are excited to continue the partnership again this year.”

This season, ISC will cover the following teams in the regular season: women’s soccer (1), men’s soccer (2), volleyball (2), football (5), women’s basketball (6), and men’s basketball (7). Additionally, ISC will stream all postseason contests hosted by Marian, including Crossroads League Tournament games and NAIA playoff games. An announcement will be made later in the year to announce the plan for spring sporting events, following the releases of their schedules.

“We are thrilled to continue our partnership with Marian University and the Knights again this season,” said Greg Rakestraw, Vice President of ISC Sports Network. “Marian has become one of the top athletic programs in the NAIA ranks and in all of small college athletics, and we are ecstatic to play a small role in that success. With no football being played last fall, the folks at Marian extended coverage to sports like soccer and volleyball, and we’re overjoyed to continue that relationship this season. And we can’t wait for the spring to bring our cameras to Marian baseball and softball for the first time.”