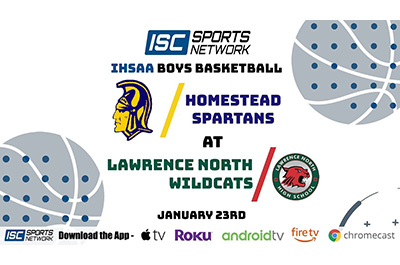 The #1 and #2 boys basketball teams in the state clash in a unique matchup between Indiana’s two largest cities. #1 Lawrence North (12-0) welcomes Fort Wayne heavyweight #2 Homestead (13-0) to the northeast side of Indianapolis on Saturday afternoon, January 23.

“We’ve been fortunate all year to have some great matchups featuring teams from all across the state of Indiana, but it’s always special when you’ve got #1 vs. #2,” said Greg Rakestraw, Vice President of ISC Sports Network. “This Homestead team has been on our airwaves before this season, earning a double overtime win against Cathedral at the All State Sneakers for Santa Shootout in December. We’re excited to have them once again, and to be able to bring this game to viewers in Fort Wayne via our partnership with Xfinity and Comcast Local Channel 81.”

“Lawrence North versus Homestead is undoubtedly a game worthy of a statewide stage,” Rakestraw continued. “I’m glad we can deliver that to over 400,000 households across the state and to fans everywhere via ISCSportsNetwork.com.”

Besides being a battle of top-tier programs, Saturday’s tilt between the Wildcats and Spartans will also be a matchup of legendary coaches. Homestead’s Chris Johnson (2015) and LN’s Jack Keefer (1989, 2004-06) have combined for five state championships and nearly 1,300 wins in the span of over 75 years on the sidelines in the state of Indiana.

The game is proudly presented by Optimum Performance Sports, Summit City Chevrolet, Burton Vosmeier & Looney, Lawrence Township Schools, and Ed Martin Auto Group. It tips at 5:30 PM and can be viewed on ISC Sports Network, Comcast TV (channel 81) or via pay-per-view on ISCSportsNetwork.com.

For more information, contact the ISC Sports Network at video@iscsportsnetwork.com.